This post is part of a series on Ray Bradbury and his book, “The Martian Chronicles,” which will run from Memorial Day weekend through Labor Day weekend.

Ray Bradbury was born in 1920 and died just recently, in 2012. He’s probably best known for Fahrenheit 451, which as I’ve said elsewhere, I see as a great idea but a so-so novel. I believe Bradbury is a phenomenal short story writer, though, which is one reason why I like The Martian Chronicles so much. As you’ll see, it is much more of a short story collection than a novel. 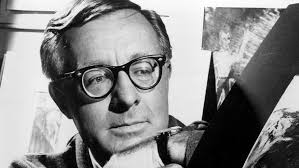 The story of the publication of The Martian Chronicles, which I heard from Bradbury ‘himself’ when I listened to it on tape many years ago & Bradbury introduced the book & told the story, is that he was in New York trying to sell a bunch of his stories to various publishers. The consistent message they kept giving him was that they wanted novels, not short stories. He was dejected about that until he got the idea to tie the stories together in order to tell, in a way, a short ‘history’ (set in the future, of course) of the first contact and ongoing interaction of Earth and Mars.

He did this primarily by writing short vignettes to place between already existing stories (think here, maybe, of how Steinbeck puts his little social vignettes between longer chapters that tell the story of the Joads in The Grapes of Wrath), and in this way he created a timeline and loose connection for stories not originally written to go together. It was enough. The book was bought and published as a novel in 1950, and I consider it, along with Isaac Asimov’s Foundation trilogy from about the same time, to be a keystone in the rise of modern sci-fi literature.

The rest, as they say, is history. Bradbury went on to be one of the most prolific and respected sci-fi writers of the second half of the 20th Century. And so, I invite you to join me this summer to read and explore and discuss The Martian Chronicles. It’s strange, it’s funny, it’s imaginative, it’s poignant, but most of all, it is a fascinating study of early sci-fi, of our post-atomic fears that gripped the world in 1950, and of a remarkable young writer stretching his wings as he learns to fly.

When you open up your copy of The Martian Chronicles, or the copy you borrow from the library, one of the first things you’ll notice is the epigraph. The epigraph reads as follows:

It is good to renew one’s wonder, said the Philosopher. Space travel has again made children of us all.

I can’t tell you just how much I love this epigraph. I find it entirely appropriate, for clearly, it works beautifully on two levels. Bradbury could be saying, much like Gene Roddenberry’s/Star Trek’s famous “Space, the final frontier,” that the dawn of the Space Age has renewed in man the sense of exploration perhaps lost when we had spanned the globe and our cartography of earth was, at least on the surface, mostly complete.

And yet, I think just as likely, he is speaking of the gift of wonder that comes from stories about space, not just space itself. Fiction, like space, provides unexplored vistas and opportunities galore to renew our wonder. We need only pick up the book and open it to get lost inside.

It is good to renew one’s wonder, to become childlike once more, whether through the beauty and grandeur of the universe, or through the creativity and imagination of a fictional world. That’s why to me, my favorite books are so much more than books. They are portals somewhere magical. Maybe The Martian Chronicles will become such a portal for you. Maybe not. Open it up, and let’s see.

Next week, we’ll look at “Rocket Summer” and “Ylla.”